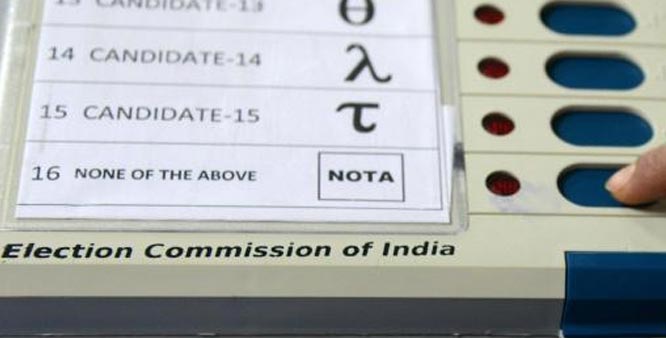 “None of the above” (NOTA) is an innocuous looking last option in most exam having multiple choice questions. However today NOTA has become manifestation of fundamental right of freedom of speech and expression in electoral sphere. NOTA as an option has already been recognized as a legitimate option in the direct election by the Government and the Hon’ble Supreme Court in the year 2013.

By having NOTA as an option in any election we allow the voters a choice to reject the existing candidates thus allowing voter to exercise their democratic right in a better way and thus as a result forcing various political parties to field better candidates.

The issue becomes contentious when NOTA is introduced in an indirect election like the one in Rajya Sabha (Election is conducted through proportional representation single transferable vote) where elected legislators are the voters and they owe their allegiance to one political party or the other.

Introduction of NOTA in such elections has certain merits and demerits which are as follows:

MERITS:
1) Upholds Constitutional Right : As mentioned above freedom of speech and expression is a constitutional right and by electing or not electing any one a person exercises that right. NOTA signifies that freedom being extended to a legislator.

2) Instills Bipartisanship: NOTA provides an opportunity to a legislator to rise above partisan politics and go in for conscious vote if he finds that a existing candidates are not worthy of his vote.

3) Protest: NOTA can also be used as an protest against the “high command culture” which involves forcing of candidates from “Top-down”, a legislator by voting for NOTA register such protest.

DEMERITS
1) Encourages Horse trading: This indirectly impinges the anti-defection provisions provided in 10th Schedule of the constitution, since there is a very high possibility of horse trading and legislators switching sides at the last moment and voting for NOTA.

2) Political vengeance: Since the election for Rajya Sabha is conducted vide an open ballot, a legislator exercising option of NOTA opens himself against political backlash in his own party.

Since NOTA is manifestation of Freedom of Speech and Expression safeguarded in 19(1) (a) of the Constitution of India it will certainly hold a higher place when compared to will of political party or its chief whip. The benefits of NOTA in indirect election of Rajya Sabha outweigh its demerits, and the demerits can be taken care of by good surveillance of elections by neutral bodies like EC, introduction of NOTA is a step in a right direction.